Below are some of the long term investments the Beaverton Special Events group have funded. 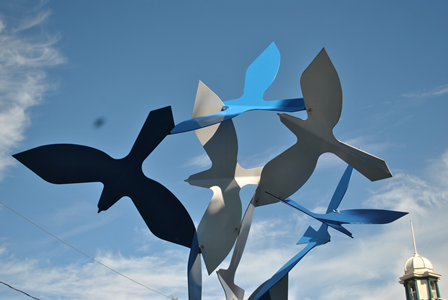 This sculpture was commissioned by Beaverton 2000 Committee (precursor to Beaverton Special Events) as a millennium project with support of many individual citizens and businesses.

Gerald Gladstone was a resident of Beaverton.  His forty-year career included scores of major international commissions.  The sculpture was erected in Alexander Muir Park. 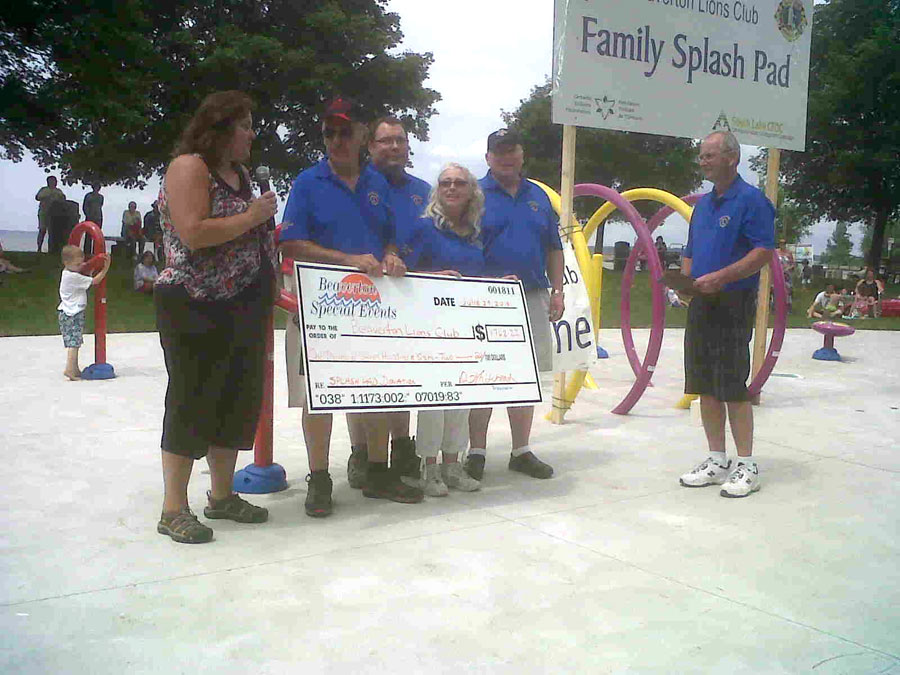 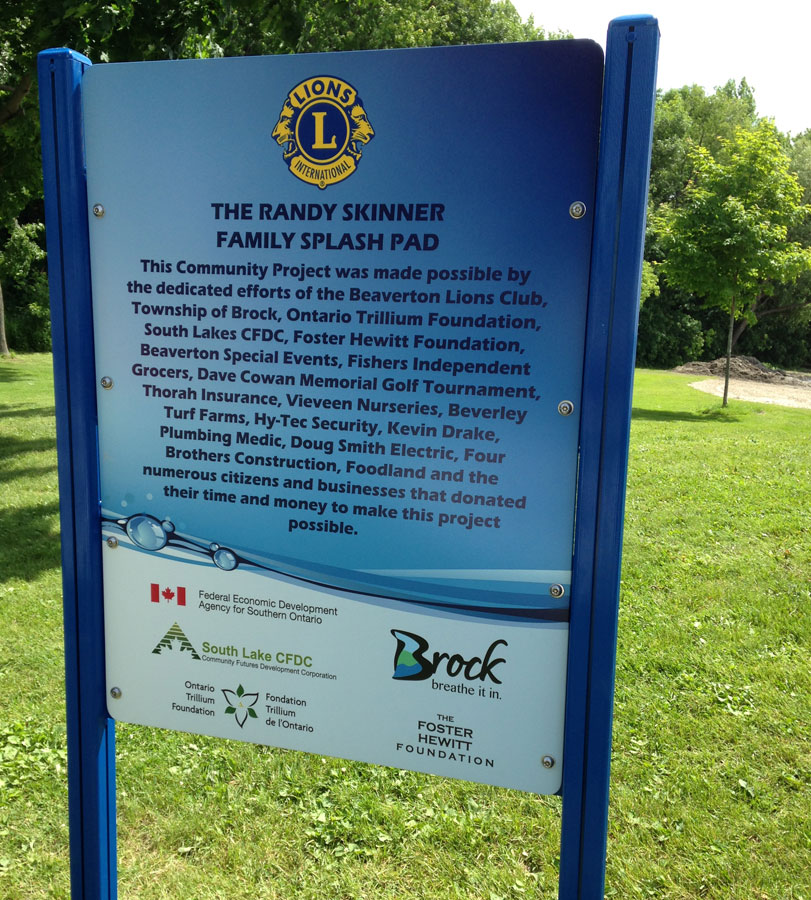 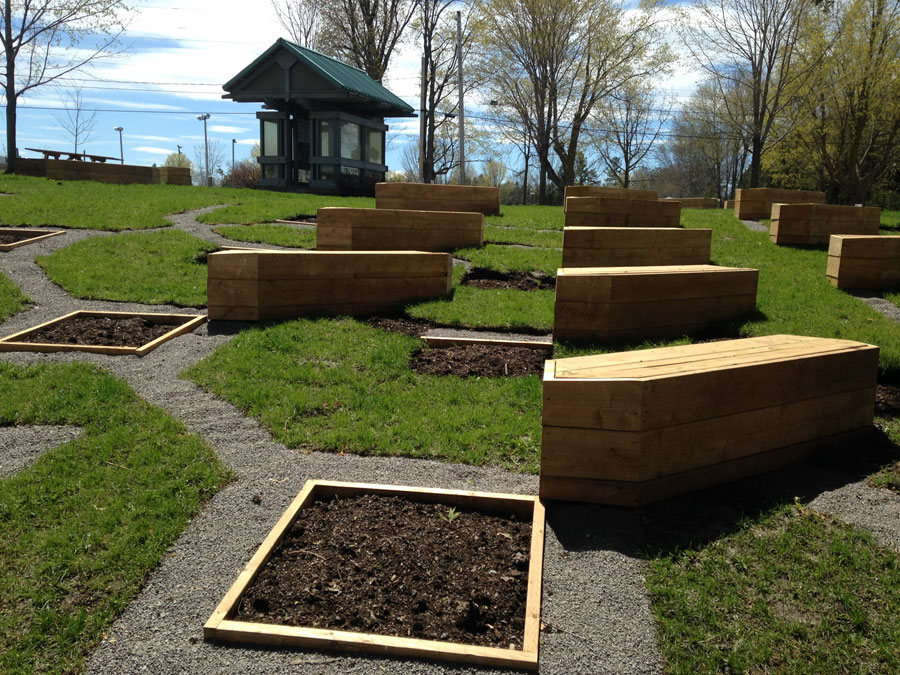 Contribution towards Rewilding Beaverton Harbour to pay for the planting of native species in the people gardens. 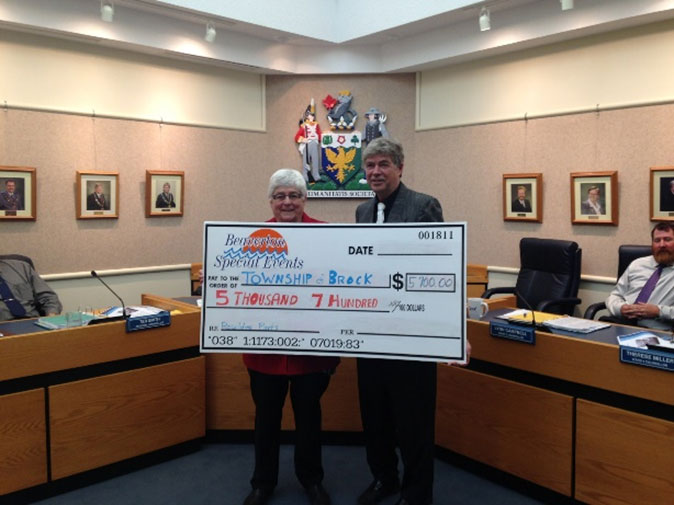 Introduced in 2012, the Hydration Station provided by WOW (Water on Wheels) was purchased by Beaverton Special Events in 2015  through the generous support of TD Friends of the Environment Foundation (TDFEF).

People (and pets) are appreciative of the fresh cool water and the system that allows them to refill their own bottles.  In 2015, our system was in full use during our Brock’s Big Bite Festival in August.  Here 1500 visitors were able to enjoy a refreshing sip.   Beaverton Special Events makes the system  available for use by other community groups.   Our events continue to be ‘single-use water bottle free’. 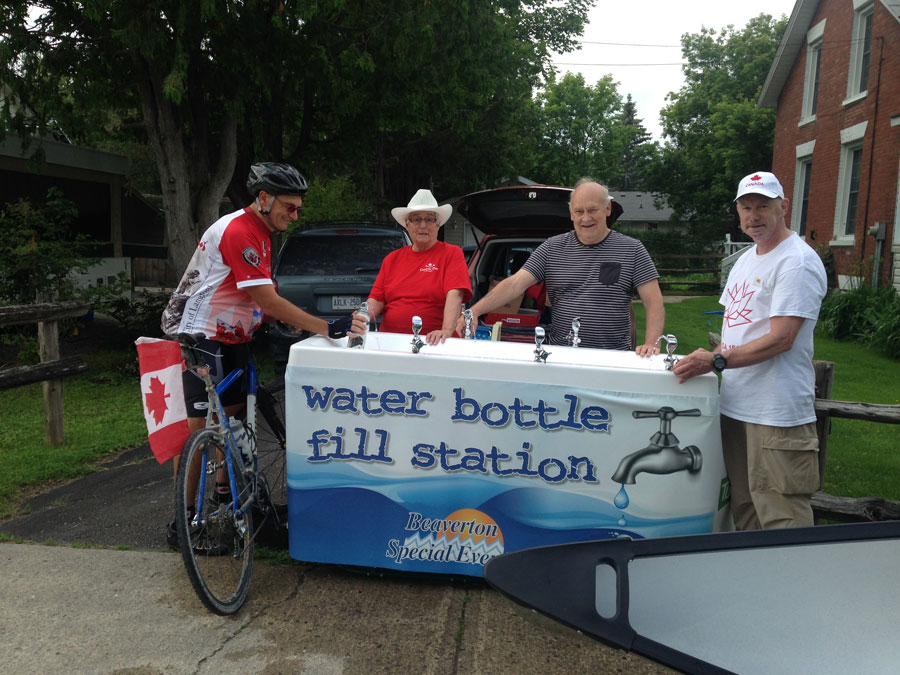 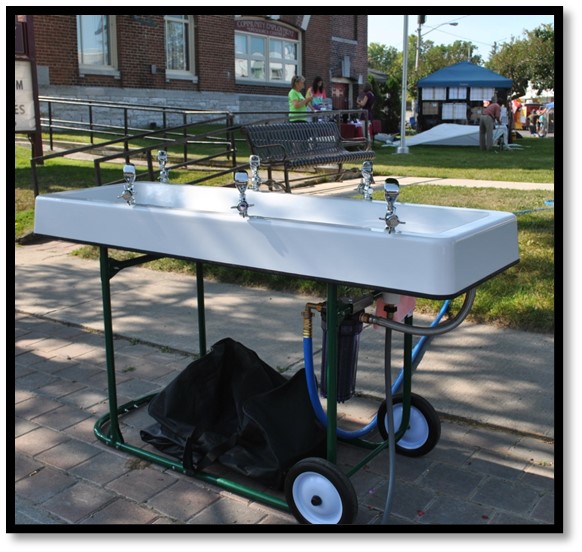 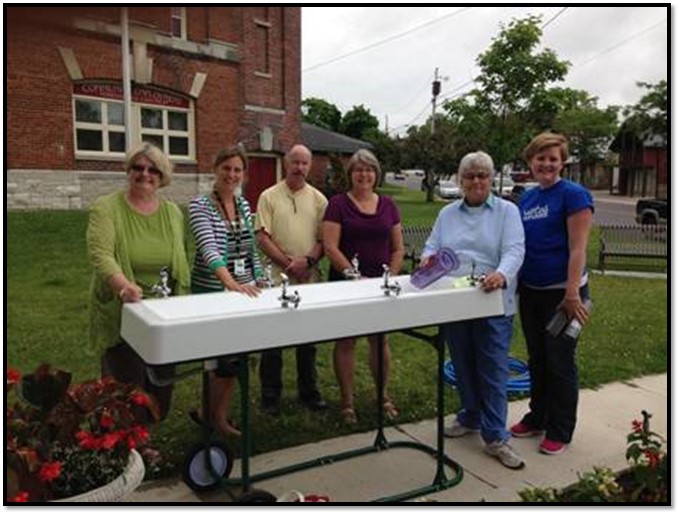 Murals of prominent citizens for 2009 celebrations of Beaverton’s 125th anniversary.

Artist, Bob Bastarache was commissioned to create this mural to recognize individuals who made significant contributions to Beaverton.  The murals were created through the generous support of the Ontario Trillium Foundation and the Foster Hewitt Foundation.

Peter McMillan (1859 – 1954) became president of the Canadian Lacrosse Association in 1902 and was a member of the famous “Doodads” for more than 20 years, a social group who played cards, exchanged gossip and argued over current affairs.
Duncan and Peter McMillan were born Feb 14, 1859 making them known as the valentine Twins in the Beaverton area.  They took over the family’s carriage making and blacksmith shop on the corner of Main St. and Mara Rd. and shared a passion for sports, lacrosse for 27 years and curling for 46.

William Smith (1835 – 1921) established his first foundry in 1871 with country wide sales of all types of products which spread the name of Beaverton as business prospered. Despite the early frame buildings being destroyed by fire and uninsured, the community rallied to assist with the rebuilding and the Phoenix Foundry was established.
Mr. Smith is remembered as an astute businessman who knew how to change with the times. His empire spanned many years, employed many Beavertonians and provided quality merchandise to his customers.

Duncan McMillan (1859 – 1946) was the Reeve of Beaverton in 1893 and served as a town councillor for five years.
In 1888, the brothers held a barn raising event to build a 50 x 164ft skating rink frame between their carriage factory and the Beaver River.
They were founding and executive members of the famous Checkers Lacrosse team, winning the Ontario championship in 1899.  The twins truly embodied the spirit of dedication to excellence that makes an individual successful.  The serve as an inspiration to today’s youth. 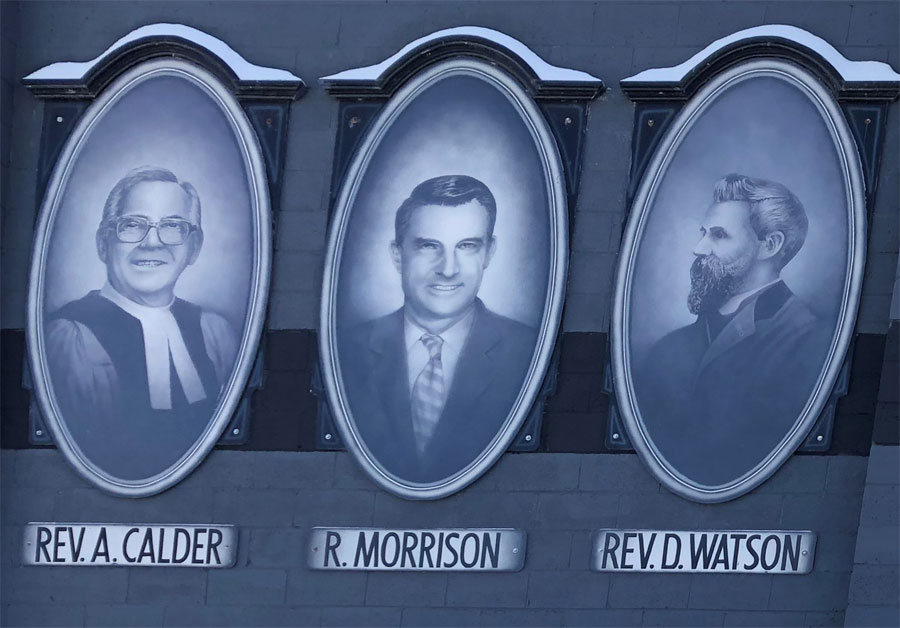 Rev. Dr. Alex Calder (1915 – 1992) was born, raised and educated in Beaverton before receiving a B.A. degree from the University of Toronto and a Doctorate of Divinity from Knox College.  As Reverend, he served several communities across Canada including Peace River, Alberta, the Maritimes and many in Ontario.  In 1984 he was elected Moderator of the 110th General Assembly of the Presbyterian Church of Canada.
Dr. Calder was a passionate man, known for his wit and wisdom; he always had time for people.  He loved his family, he loved his church and he loved life.

Russell Morrison (1909 – 1994) was born and raised in the Beaverton area and actively farmed 350 acres until 1975. Russell held positions of Councillor, Deputy Reeve and Reeve of Thorah Township for over 19 years.
He participated in, coached and judged competitive ploughing for over 25 years and was a member of the local historical and agricultural societies.  He was awarded the Ontario Bicentennial Medal for Community Service in 1976.
Mr. Morrison was a true humanitarian who serves as a shining example in all aspects of community life.

Rev. Dr. David Watson (1823 – 1903) was born in Scotland and immigrated to Canada at the age of 21.  He taught school in London, Ontario for several years to finance his studies at Queen’s University from which he earned his B.A. in 1848 and a Theology degree in 1853. As the minister of Beaverton’s Old Stone Church for 45 years, Rev. Watson conducted services in Gaelic & English and he ensured that widows and their families received support from their fellow parishioners.  For many years, he reached out to the community by holding basic literacy classes for adults and became the local school inspector.

Dr. H. Ames (1919-1998) came to Beaverton in 1949 from Hamilton full of energy and enthusiasm, spending the next 45 years providing quality health care to the community. In 1973 he was awarded a grant to finance a pilot project ot incorporate a nurse practitioner into his practice.
As an active member of the community, he was the custodian for the Beaverton Thorah Film Council and a member of the Beaverton Lions Club. He was one of three doctors who moved into the new Beaverton Thorah Health Centre in 1974 at its current location on Main Street

Helen (McCord) McKenzie (1895 – 1980) graduated as a registered nurse from Wellesley Hospital in Toronto. In 1926 she married A. Cameron McKenzie, moved to Beaverton and raised their two daughters.
She became Beaverton’s only female Reeve and served on local council for six years during which time the original Beaverton Water Works was designed and constructed.
In 1947 she supported the first minor hockey league with start up funds. She chaired both the local Red Cross and the Cancer Society and was a director for the Ontario County Children’s Aid for ten years.

Foster Hewitt (1902 – 1985) was a summer resident of Ethel Park, Beaverton since 1934. He introduced many of his friends and colleagues to summers in Beaverton and lake Simcoe.
He pioneered sports broadcasting in Canada, enriching the lives of hockey fans everywhere with his famous radio broadcasts and later with the television play-by-play of Hockey Night in Canada from Maple Leaf Gardens.
Foster was inducted into the Hockey Hall of Fame and the Canadian Sports Hall of Fame. He received the Order of Canada in 1972 and was known as the “Voice of Hockey” for 56 years. 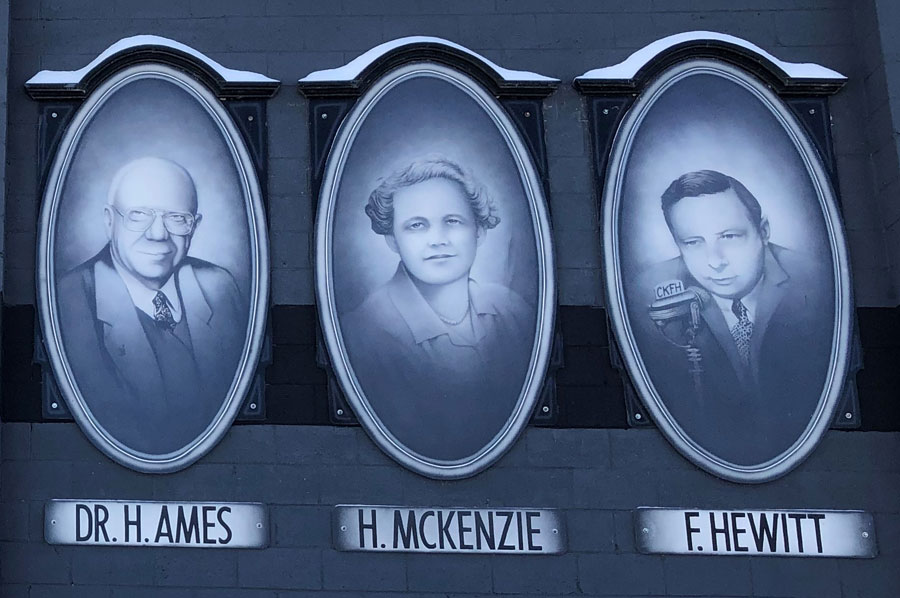 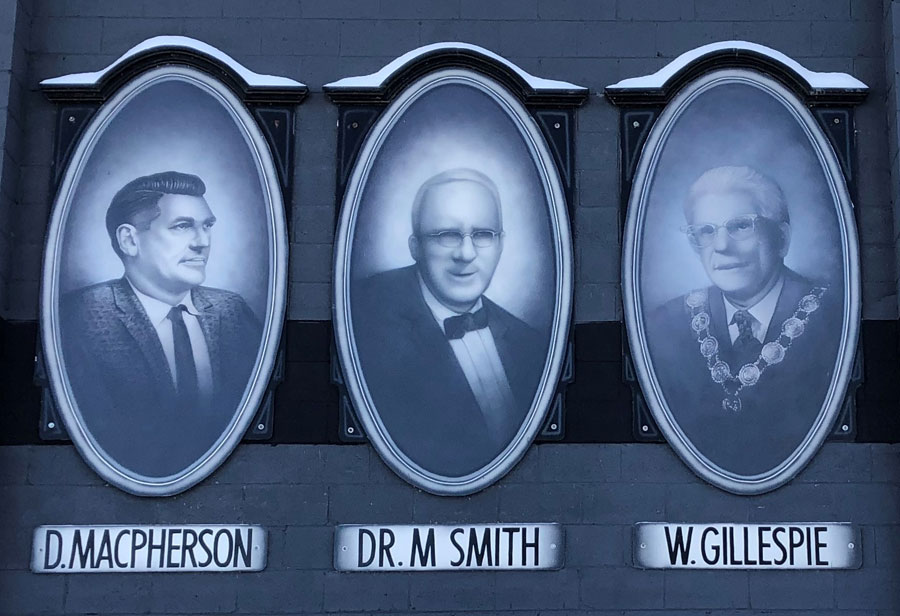 Dr. Mason Smith (1885 – 1956) was born in Cannington and came to Beaverton in 1909, spending the next 43 years serving the community as a dedicated rural doctor facing many challenges travelling the country roads.  He was well known for attaching skis to his car in the winter to travel to Brechin and Thorah Island.
In 1914 he designed and had the first medical centre built in town at the corner of John and Simcoe Streets.

Duncan Macpherson (1924 – 1993) was a summer resident in Beaverton since the 1950s and became a permanent resident in 1979.  His outstanding career as an illustrator and political cartoonist took him around the globe to conventions and world events, always returning to his beloved Beaverton.  Duncan was awarded the Order of Canada, the Queen Elizabeth Jubilee Medal, the Canada Council Molson Award and The Canadian Royal Academy Medal, was made a Fellow of the Ontario College of Art and was named to the News Hall of Fame.  Six of his Scottish historical paintings hang in the Beaverton Public Library.

William (Bill) Gillespie (1916 – 1993) was a long time resident of Beaverton, serving on council for 19 years including 16 years as Reeve.  In 2953, Bill lobbied for the new home for the aged in Beaverton resulting in the building of Lakeview Manor.  Gillespie Gardens senior apartments was built in 1994 and named in his honour.
Also during his tenure, Beaverton saw the installation of the sewage system, the community centre and the reconstruction of the Mara St. Bridge. He was a past president and life member of the Lions Club and the Royal Canadian Legion Branch 135.

A Tale of a Town

Another initiative was to participate in “A Tale of Town” project in which people were asked to contribute their memories of Beaverton. These were recorded during Brock’s Big Bite and were released nationally as an online radio podcast for The Walrus Magazine in February 2015.  Segments of the plays were performed live on the street at the 2016 Big Bite Festival.  The tales from Beaverton can be heard here. 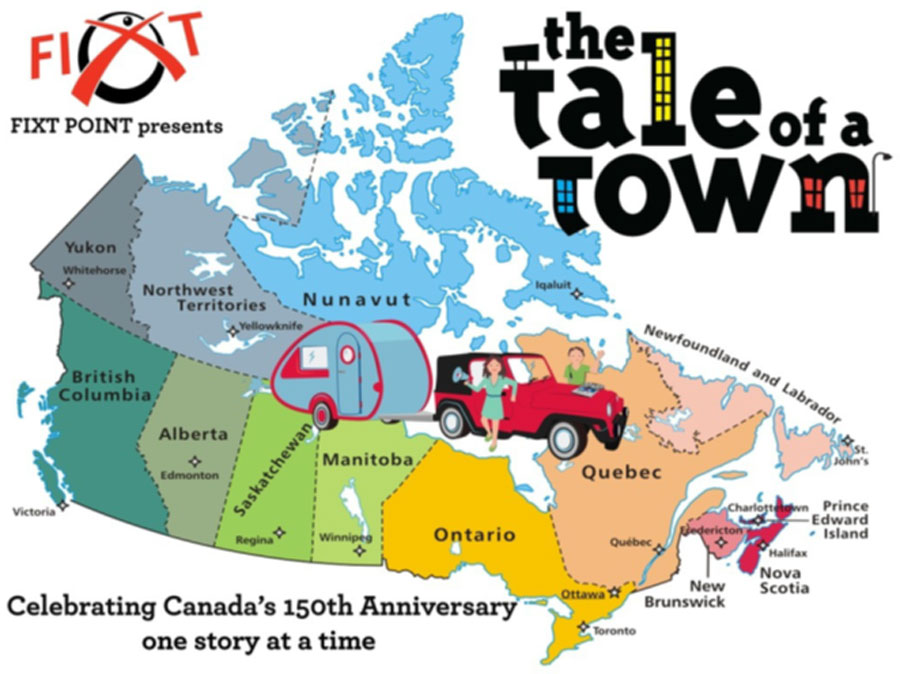 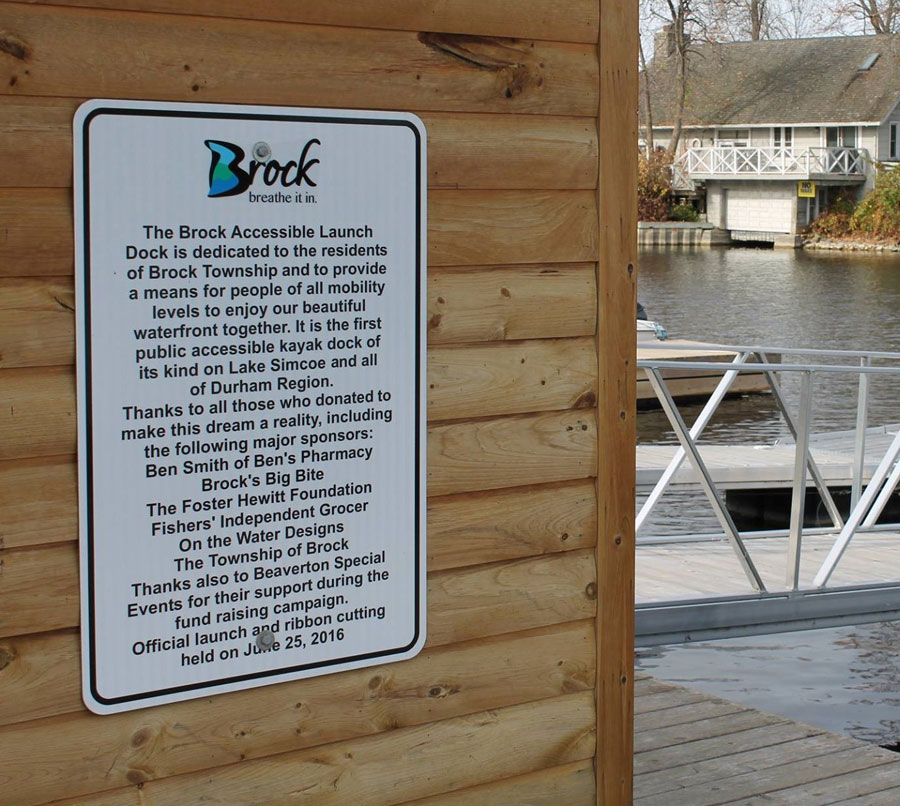 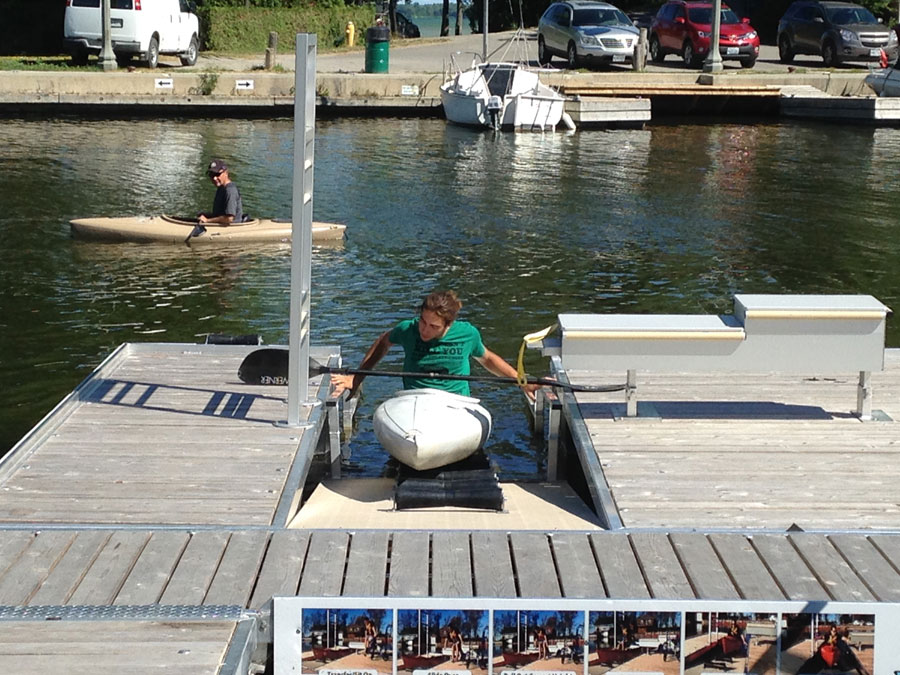 In 2015, $2600 from the proceeds of Brock’s Big Bite was donated to the Accessible Kayak Launch Dock initiative in the Beaverton harbour as our community enhancement project.

The dock was officially opened in 2016 by Paralympian Alec Denys.  The project spearheaded by a group of volunteers, raised more than $10,000 worth of donations, while Brock Township contributed $15,000.

The dock is the first of its kind on Lake Simcoe and in Durham Region.  The Brock Accessible kayak dock makes launching your paddle craft safe and easy for the whole family, from children through to grandparents and, with the attached transfer bench, even allows for ease of use by people confined to a wheelchair.

Community Bench sponsored by Beaverton Special Events and dedicated to the many volunteers who make our events successful  and our community a wonderful place to live. 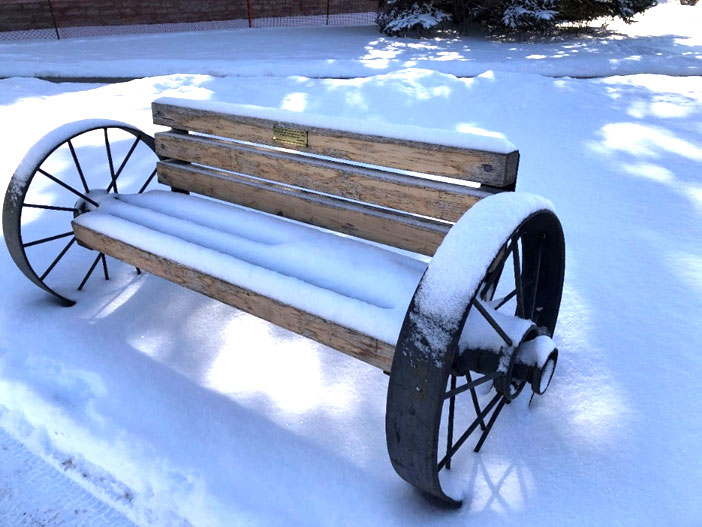 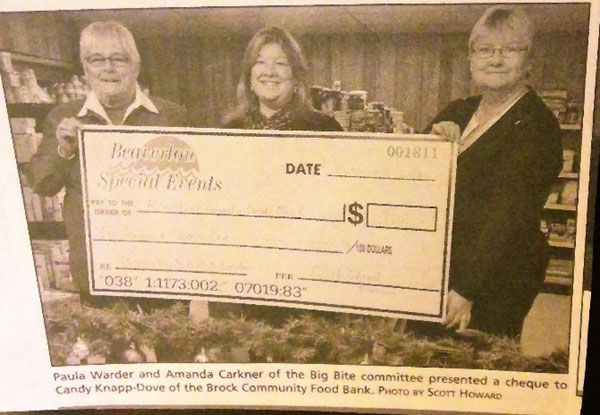 Brock’s Big Bite has donated proceeds from the past nine festivals towards the food banks in Brock. As a special initiative in 2015, 29 Bountiful Baskets of fresh food were purchased for the Brock Food Bank from the donations received for rickshaw rides.

Beaverton Special Events has also directed proceeds from the Brock’s Big Bite Festivals to several community organizations for their special projects including the most recent contribution towards the Brock Community Health Centre in 2019. 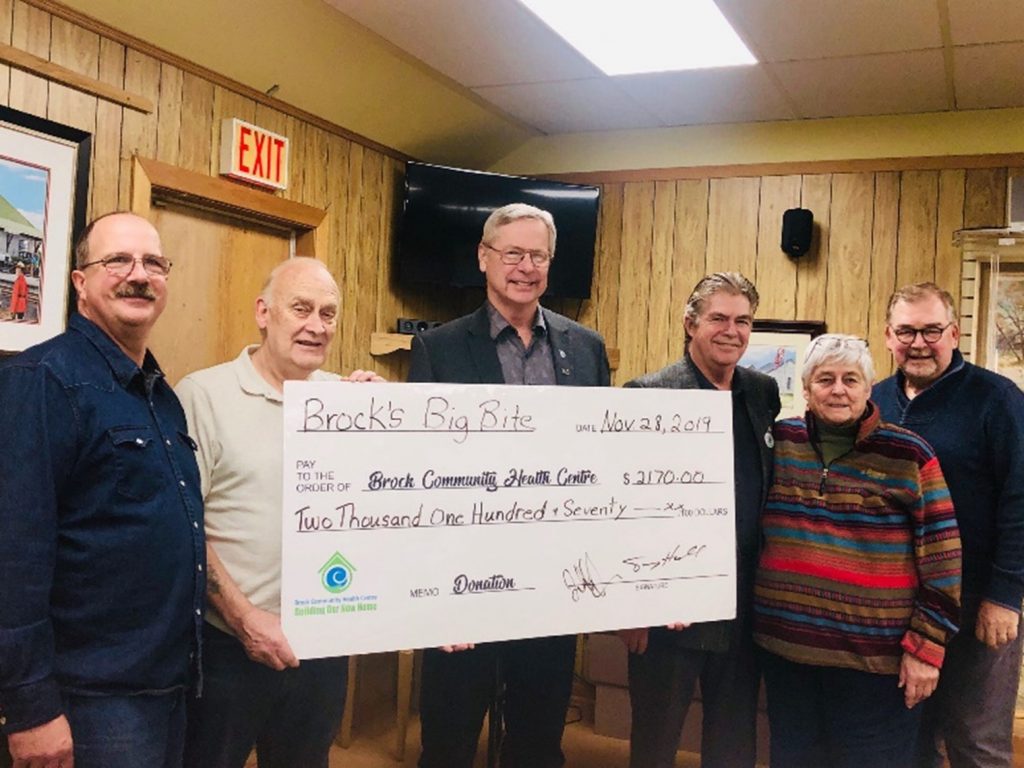 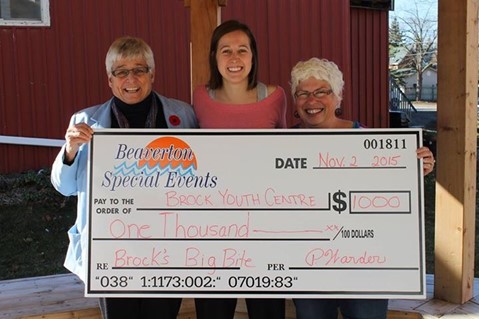 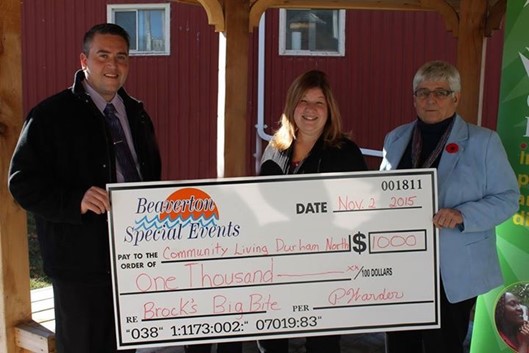